Are Ocean Freight Carriers Taking Control of Too Much of the Supply Chain?

One of the top stories in the Journal of Commerce (JOC) yesterday (January 31st, 2022) was CMA CGM acquiring “a majority stake in European last-mile logistics specialist Colis Privé, a parcel delivery company part-owned by Amazon.”

You might be thinking, what’s the big deal? It’s just a giant shipping company expanding its logistics business. There’s a danger to these giant corporations taking over the entire supply chain, which these carriers seem to be systematically doing.

I warned for years that allowing these giant shipping lines to join together in alliances that dominate all of ocean shipping meant shrinking competition and would eventually turn out very poorly for shippers. In 2020, we saw that come to fruition as the carrier alliances manipulated capacity by blanking (cancelling) hundreds of sailings, shrinking supply well below market demand, when they were afraid of losing money because of the onsetting pandemic. The action allowed carriers to hike prices during the initial demand dip but also caused major maldistribution of equipment and shipping containers around the world.

That maldistribution played a major role in the supply chain disruption that came after politicians locked down their constituents and pumped out trillions in stimuli packages, sending shipping demand (and inflation) soaring. Of course, freight rates have soared as well to the great benefit of ocean freight carriers.

Ocean Carriers Have Billions to Spend

Since 2020, ocean freight carriers have done nothing but rake in billions and billions of dollars. That trend of enormous profits hasn’t stopped yet. In fact, other top JOC stories right now include Full ships, port woes lead ONE to $6.7 billion net for fiscal H1 and Soaring rates, congestion drive Hapag-Lloyd to ‘extraordinary’ 2021 result. The extraordinary amount Greg Knowler reported about in that second article is $26.4 billion in revenue for Hapag-Lloyd in 2021 and a forecast of 12 to 13 billion dollars in profit.

Major ocean freight carriers across the board have been seeing these incredible profits in the billions of dollars, and its increasing their ability to seize control of more of the supply chain, as CMA CGM is doing with this last-mile logistics company purchase. As a shipper in the U.S., you might be thinking, well, Colis Privé is a European company, even if it is part-owned by Amazon. That won’t bring CMA CGM into last-mile logistics here.

Well consider what Knowler reports in the JOC article about the acquisition:

While the business of Colis Privé is currently confined to France, Belgium, Luxembourg, and Morocco, with activities soon to begin in the Netherlands, CMA CGM intends to expand outside Europe.

You don’t think those expansion ambitions would include the U.S.?

Meanwhile, CMA CGM has also expanded from the ocean to the sky, which is another aspect of the carriers’ expansion across the supply chain that the Colis Privé acquisition supports:

It will also support air freight shipments as the carrier rapidly expands its CMA CGM Air Cargo business. The air cargo division was launched in February 2021 using two Airbus 330-200 freighters purchased from Qatar Airways; that was followed by orders for two new Boeing 777 freighters in September and for four Airbus 350 new generation freighter aircraft in November.

CMA CGM’s acquisition is not an isolated event. Ocean freight carriers are making plenty of moves with the billions they’re making to buy their way into more and more of the supply chain. Just weeks ago, Fresh Fruit Portal published an article about Maersk acquiring “LF Logistics, a Hong Kong-based contract logistics company for US$3.6 billion to boost the shipping giant’s presence across Asia.”

The article goes on to report:

The acquisition of LF Logistics will transform Maersk into a global integrator of container logistics, providing digital end-to-end logistics solutions to customers worldwide, Soren Skou, CEO of Maersk said in a statement.

Maersk will add 223 warehouses to the existing portfolio, bringing the total number of facilities to 549 globally, spread across a total of 9.5m square meters.

In December, Eric Krulisch wrote in an American Shipper article:

These examples are just the tip of the iceberg.

Furthermore, when I talk about these shipping giants like Maersk and CMA CGM grabbing control of the whole supply chain, I mean the whole supply chain. I’m not just talking about ocean, air, and land shipping. For years, ocean freight carriers or their parent companies, have been buying their way into the ports themselves. And all over the world. China’s state-owned shipping giant COSCO is a big player when it comes to buying port terminals.

There are obvious national security implications to foreign entities controlling the supply chain to and through countries, but owning and operating port terminals – entryways into countries – is even more concerning.

In 2019, Universal Cargo published a blog about the Trump Administration forcing COSCO to sell its ownership of the Long Beach Container Terminal at, of course, the Port of Long Beach. That’s right, where along with its sister port, the Port of Los Angeles, approximately 40% the country’s imports enter the U.S. COSCO gained ownership of the terminal by buying Orient Overseas (International) Limited (OOIL) in 2017. OOIL, which was a Hong Kong based shipping company, had gained control of the terminal after the Obama Administration signed off on a 40-year container terminal lease at the Port of Long Beach in 2012.

Going back further, to 2016, I wrote a blog about the now defunct ocean carrier Hanjin selling its stakes in Total Terminals International, another Long Beach terminal, to a company largely owned by the ocean shipping giant MSC, giving MSC complete control of the terminal. What should give one pause is when I started writing for Universal Cargo a bit more than a decade ago, about 80% of U.S. terminals were owned by foreign entities. I’m not sure there’s been a great deal of change – I’ll have to do a deep dive on it – but there’s still a big push to buy up terminals. In September, Voice of America published an excellent article about China buying up port terminals and shipping control, particularly through COSCO, all arround the world.

Those stories were just a few examples to show how ocean freight carriers have been buying port terminals on top of air freight, warehousing, and last-mile logistics capabilities. Are there no conflicts of interest to be seen there? For example, wouldn’t a carrier that owns a terminal be more likely to prioritize its shipments over those of a competitor’s? What about competition with American logistics providers? Would these massive carriers be able to crush smaller logistics companies that try to compete with them or just buy them out altogether?

Do we really want to see these companies controlling that much of the supply chain?

One Scary Last Thing to Buy

Ocean freight carriers have a long history of unreliability, lack of transparency, and even antitrust violations. Now they have more money than they’ve ever possessed before. I would say the only thing they can’t buy is the governing bodies that regulate the industry, but it doesn’t take much watching of politics to think a little lobbying can’t buy even that.

Just think about how Pfizer announced their plan of boosters coming for all even though they didn’t have FDA approval. That ruffled regulators’ feathers. So Pfizer had a meeting with the Biden Administration. Then the Biden Administration announced the plan for boosters being administered ahead of approval and put pressure on the FDA to go along, leading to two top vaccine officials – Dr. Marion Gruber, the director of the FDA’s Office of Vaccines Research and Review, and her deputy, Dr. Philip Krause – to resign. Pfizer got it’s booster plan approval from the Biden Administration and the leaned-on FDA. So, yeah, ocean freight carriers could probably buy regulating bodies too. 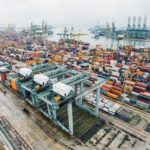